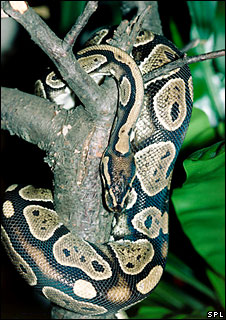 Snakes may be declining across the world, according to a global study.

Researchers examined records for 17 snake populations covering eight species over the last few decades, and found most had declined markedly.

For reasons that are not entirely clear, some populations shrank in number abruptly around 1998.

Writing in the journal Biology Letters, the researchers describe the findings as “alarming” but say much more work is needed to understand the causes.

“This is the first time that data has been analysed in this way, and what we’ve shown is that in different parts of the world we seem to have this steep decline in a short period,” said project leader Chris Reading.

“It surprised us when we realised what we were looking at,” he told BBC News.

Dr Reading’s team at the UK’s Centre for Ecology and Hydrology ran the study with institutions in Australia, France, Italy and Nigeria.

The main problem for anyone wanting to conduct a global survey such as this is simply lack of data.

Monitoring snake populations means marking the individuals in some way – typically by snipping a pattern into their scales, or implanting a microchip.

Field seasons can last for many months, and have to be repeated annually.

The researchers believe they amassed most, if not all, long-term datasets for this study – although “long-term” in this context means going back more than one decade, in some cases more than two.

Nevertheless, within this relatively short timeframe, eight of the 17 populations were seen to fall markedly in size – some by more than 90% – with only one showing any sign of a rise.

Species in decline include the asp and the smooth snake from Europe, the Gabon viper and rhinoceros viper of West Africa, and the royal python.

Populations shrank even in protected areas, suggesting that the progressive loss of habitat for wild animals being seen all over the world is not the only cause.

Similar steep declines observed in frogs and newts in an earlier period were eventually found to be caused by the fungal disease chytridiomycosis.

The year when many of the snake declines began – 1998 – raises the question of whether climatic factors might be involved, as very strong El Nino conditions contributed to making it the hottest year recorded in modern times.

Dr Reading’s research group suggests many causes might be involved, and is appealing to other researchers to come forward with any more long-term datasets that might broaden the picture.

“The purpose of this paper was to say ‘this is what we’ve found’, and to say to other herpetologists ‘now go and look at your own data’,” he said.

“But I think that with so many populations in different places showing decline, it’s more than co-incidence.”

This entry was posted in ecological crisis and tagged ecocide. Bookmark the permalink.