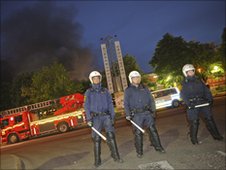 Rioters in the Swedish capital, Stockholm, have burned down a school building and thrown stones at police in a second night of disturbances.

The trouble began on Monday after a group of youths in a suburb with a mainly immigrant population were refused entry to a school dance.

Police say up to 100 youths went on the rampage, throwing stones and setting several cars alight.

Police said the rioters threw stones at the fire engines, preventing them from reaching the school building before it burned to the ground. The youths also attacked a police station.

Rinkeby is home to a large number of first- and second-generation immigrants. Many of them are from Somalia, so the area is sometimes nicknamed Little Mogadishu.

Government ministers have visited Rinkeby to assess the situation.