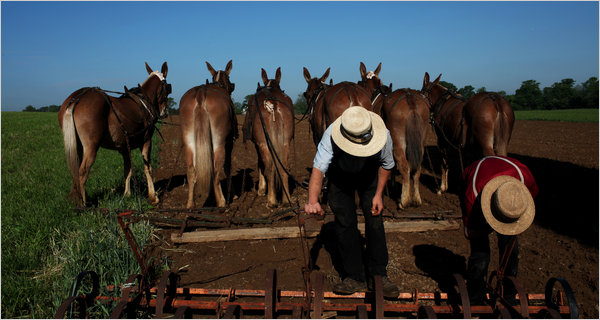 LANCASTER, Pa. — With simplicity as their credo, Amish farmers consume so little that some might consider them model environmental citizens.

“We are supposed to be stewards of the land,” said Matthew Stoltzfus, a 34-year-old dairy farmer and father of seven whose family, like many other Amish, shuns cars in favor of horse and buggy and lives without electricity. “It is our Christian duty.”

But farmers like Mr. Stoltzfus are facing growing scrutiny for agricultural practices that the federal government sees as environmentally destructive. Their cows generate heaps of manure that easily washes into streams and flows onward into the Chesapeake Bay.

And the Environmental Protection Agency, charged by President Obama with restoring the bay to health, is determined to crack down. The farmers have a choice: change the way they farm or face stiff penalties.

“There’s much, much work that needs to be done, and I don’t think the full community understands,” said David McGuigan, the E.P.A. official leading an effort by the agency to change farming practices here in Lancaster County.

Runoff from manure and synthetic fertilizers has polluted the Chesapeake Bay for years, reducing oxygen rates, killing fish and creating a dead zone that has persisted since the 1970s despite off-and-on cleanup efforts. But of the dozens of counties that contribute to the deadly runoff of nitrogen and phosphorus, Lancaster ranks at the top. According to E.P.A. data from 2007, the most recent available, the county generates more than 61 million pounds of manure a year. That is 20 million pounds more than the next highest county on the list of bay polluters, and more than six times that of most other counties.

The challenge for the environmental agency is to steer the farmers toward new practices without stirring resentment that might cause a backlash. The so-called plain-sect families — Amish and Old Order Mennonites, descended from persecuted Anabaptists who fled Germany and Switzerland in the 1700s — are notoriously wary of outsiders and of the government in particular.

“They are very resistant to government interference, and they object to government subsidies,” said Donald Kraybill, a professor at Elizabethtown College who studies the Amish. “They feel they should take care of their own.”

But the focus on the plain-sect dairy farmers is unavoidable: they own more than 50 percent of Lancaster County’s 5,000-plus farms.

“It’s been an issue over the last 30 years,” Dr. Kraybill said. “We have too many animals here per square acre — too many cows for too few acres.”

For now, the environmental agency’s strategy is to approach each farmer individually in collaboration with state and local conservation officials and suggest improvements like fences to prevent livestock from drifting toward streams, buffers that reduce runoff and pits to keep manure stored safely.

“These are real people with their own histories and their own needs and their own culture,” said John Hanger, the secretary of environmental protection in Pennsylvania. “It’s about treating people right, and in order to treat people right, you’ve got to be able to start where they are at.”

But if that does not work, the government will have to resort to fines and penalties.

Last September, Mr. McGuigan and his colleagues visited 24 farms in a pocket of Lancaster County known as Watson’s Run to assess their practices. Twenty-three of the farms were plain sect; 17 were found to be managing their manure inadequately. The abundance of manure was also affecting water quality. Six of the 19 wells sampled contained E. coli bacteria, and 16 had nitrate levels exceeding those allowed by the E.P.A.

Persuading plain-sect farmers to install fences and buffers underwritten by federal grants has been challenging because of their tendency to shy from government programs, including subsidies. Members neither pay Social Security nor receive its benefits, for example.

Word of the E.P.A.’s farm visits last September traveled rapidly through Amish country, Mr. Stoltzfus said, even though most plain-sect farmers do not have their own phones.

The farmers whom the agency visited declined to be interviewed. But Mr. Stoltzfus, whose brother-in-law was among them, said that as the news circulated, some farmers decided on their own to make changes in anticipation of intervention by the agency.

“I had never heard of the E.P.A. coming out to do inspections,” he said. “I think these practices are going to be required more.”

With help from the Lancaster County Conservation District, Mr. Stoltzfus applied for a government grant to help finance construction of a heifer barn with a manure pit. He expects the grant to cover about 70 percent of the cost.

But some Amish farmers were angered by the agency’s intrusion and its requirements.

“It’s certainly generated controversy,” said Sam Riehl, a farmer in the area. “We wonder whether we are being told what to do, and whether the E.P.A. will make it so that we can’t even maintain our farms.”

Mr. Riehl said he had vowed never to accept a government grant. He does have a manure management plan and a manure pit, he said, although several of his neighbors do not.

Last year the federal Fish and Wildlife Service awarded $500,000 to the Chesapeake Bay Foundation to work with the farmers on switching to barnyard runoff controls, streamside forest buffers, no-till farming and cover crops. The money has been lucrative for local agricultural companies like Red Barn Consulting, which has used some of it to hold milk-and-doughnut sessions in barns for Amish farmers and drop off fliers door to door.

The firm’s owner, Peter Hughes, and his employees instruct the farmers on manure management and do free walkthroughs to offer suggestions. In the last six months, Mr. Hughes said, his plain-sect clientele has soared from several dozen farmers to about 200.

Working with the plain sect presents challenges, Mr. Hughes said. For one thing, the group is deeply averse to salesmanship. Then there is the technological communication problem: most of the farmers share a phone booth along a road with several neighbors.

“I had one client who would call me at 5:15 every morning,” he said. “That was his allotted time to use the phone, and that was the only way for us to talk.”

Most days Mr. Hughes is on the road in his pickup visiting farmers. As he drives, he said, he is often struck by the dichotomy between a would-be pastoral ideal and the environmental reality.

“You see those cows and the fields, and it’s beautiful,” he said. “But then there’s that big pile of manure sitting back there.”

Mr. Stoltzfus hopes he is ahead of the game. By adopting new practices and building the manure pit, he thinks he can both help the environment and steer clear of E.P.A. interference.

At midday, Mr. Stoltzfus was placing a bowl of cut fruit into a propane-powered cooler in his backyard, one of the family’s few concessions to technology. Hand-washed black pants and plain cotton dresses fluttered on a clothesline behind him. He offered a taciturn reflection on how quickly things had changed — his willingness to accept the grant, for example.

“A while back, Old Order Amish would not participate in programs like this,” he said, “but farming is getting expensive.”

And then he ended the conversation.

“Is that all?” he said politely but coolly. “I have work to do.”

It was milking time.