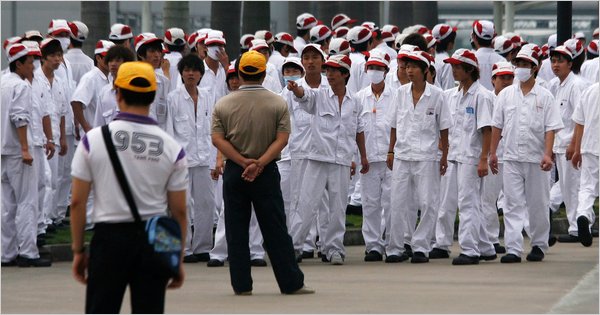 TOKYO — The strike that has crippled production at Honda Motor’s factories in China has come as a wake-up call to Japan’s flagship exporters as they seek to remain competitive and push into China’s burgeoning market with the help of low-wage workers.

The strike by Chinese workers to protest pay and working conditions has cost Honda, Japan’s second-largest carmaker after Toyota, thousands of units in lost production in the world’s biggest auto market. The walkout began on May 17 at a Honda transmission factory in Foshan, in the southeast, and has shut down all four of Honda’s factories on the mainland.

“Honda takes the situation very seriously,” said Yasuko Matsuura, a spokeswoman for Honda in Tokyo. The company “is working toward reaching a resolution as soon as possible.” On Tuesday, there were conflicting accounts by the company and Chinese employees about how soon workers might return to their jobs.

In Tokyo, the strike has driven home a salient point: as Chinese incomes and expectations rise in line with the country’s rapid growth, while Japan’s own economy falters, the two countries face a realignment that could permanently alter the way their economies interact.

To complicate the picture, Japanese companies see the Chinese as crucial consumers of their goods to make up for a shrinking and aging market at home. Some of the most profitable Japanese companies, like Fast Retailing, which runs the budget clothing line Uniqlo, have relied on production in China since the 1990s to keep prices low.

“Japan is starting to realize that the age of cheap wages in China is coming to an end, and companies that looked to China only for lower costs need to change course,” said Tomoo Marukawa, a specialist on the Chinese economy at Tokyo University.

Despite the consequences for production costs, a rise in wages and standards of living in China would be welcomed by many Japanese exporters. The same companies that produce in China have also moved to sell their wares there, moving factories to the mainland to reduce costs further and meet the needs of local customers.

In Uniqlo’s case, as incomes in China rose, it followed up with local stores in 2002; the company has opened 64 outlets in China and aims to open 1,000 stores there in the next decade.

And yet, for Honda, prices of its cars in China may have to drop considerably before the company can truly tap into the market.

The strike by 1,900 workers at Honda’s Foshan factory came as a particularly big shock to Honda, which had announced just days before that it would increase production in China to meet demand.

Honda’s chief executive, Takanobu Ito, had said the automaker would begin major expansions at two joint ventures in China, Guangqi Honda and Dongfeng Honda, increasing capacity by 30 percent to 830,000 cars and minivans by 2012.

In April alone, Honda made 58,814 cars in China, a 28.7 percent increase from the same month the previous year and a monthly record.

“The wave of motorization in China will not abate for the foreseeable future,” Mr. Ito said last week. He said that Guangqi Honda would introduce a compact car intended especially for the Chinese market that would be produced there in 2011.

The rise in output in China has been driven by a strong economic recovery in that country, which is buoying auto sales more than in any other major market. The rebound has been good news for Japanese automakers, hard-pressed to cut costs as they seek to return to profit after a collapse in car sales because of the global economic crisis.

Auto sales in Japan have remained sluggish, and sales in the United States and Europe have not rebounded to precrisis levels.

In China, Japanese carmakers are also racing to catch up with rivals after arriving relatively late in the market. The first Honda rolled out of a plant in Guangzhou in 1999, while Toyota did not produce in China until 2002.

Though sales have grown rapidly since then, Japanese carmakers are still struggling against local rivals because of a dearth of small, low-cost models, which are driving market growth in China.

Honda’s least expensive model sold in China, the Fit compact car with a 1.3-liter engine, is priced at about 83,000 renminbi, or about $12,500. A Chery QQ 1.3-liter minicar from the Chinese carmaker Chery Auto sells for about half the price of the Fit.

Given that the average monthly income in China s is 2,050 renminbi, about $300, the price of a Chery QQ is around 19 months’ salary, while the Honda Fit requires more than 40 months. The Honda Accord 2.4-liter sedan, meanwhile, sells in China for about $35,000, far beyond the reach of most workers.

For Honda, the promise of access to a huge, growing market in China was as much a factor as cheaper labor in luring it to open factories there. A 25 percent import tariff on foreign cars is also a major incentive for foreign automakers to produce in China.

More quickly than any other major Japanese automaker, Honda has started exporting cars made in China to third countries. A small plant in Guangdong makes its Jazz model for export.

Besides complaining about their pay, Honda’s striking workers complain about a wage gap: the company’s Japanese employees in China are paid about 50 times what local Chinese workers receive.

Experts say that at the factory level, Japanese companies will need to start changing the way they work with employees — giving them fair pay, benefits and a chance for promotion in line with those accorded to employees from headquarters in Japan.

“Japanese manufacturers need to raise morale by making sure that local staff can also climb within the company,” said Tatsuo Matsumoto, Asia researcher at the Japan Center for International Finance.