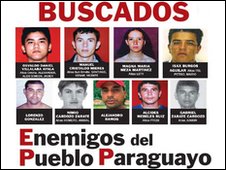 25 May
Paraguayan President Fernando Lugo says soldiers sent to the north of the country to hunt down members of a small rebel group will stay in the region for the foreseeable future.

Mr Lugo says the battle against the Paraguayan People’s Army (PPA) will continue, even though so far only one of the group has been arrested.

The government blames the rebels for a number of kidnappings and murders.
‘Drug trafficking criminals’

A 30-day state of emergency declared to fight the group was lifted on Monday.

But President Lugo, speaking on a visit to one of the five provinces covered by the emergency legislation, said he would not abandon the region.

“We will continue to gain ground, metre by metre, in the battle against the PPA, drug trafficking and the criminals that have made themselves the owners of this region,” he said in the province of Concepcion.

Opposition politicians have been critical of the lack of success in arresting more members of the group, which the government says is around 100 strong.

The government has accused it of having links to the main Colombian rebel group, the Farc.

The deployment is the biggest since democracy was restored to Paraguay in 1989.