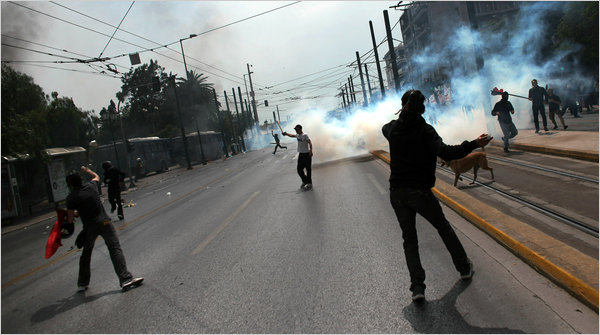 ATHENS — Panagiotis became an anarchist at 15, a middle-class Athenian kid attracted to anti-authoritarianism and the gritty central Exarcheia neighborhood, where Greece’s activists came of age. Over the last 26 years, he says he has thrown stones, bottles and Molotov cocktails during hundreds of anti-government demonstrations.

His identity is often hidden behind a mask and hood and layers of black clothing, the dress code of koukouloforoi, the “hooded ones” that Greek police say regularly turn peaceful protests here violent.

Three people died during the last big demonstration on May 5, when a band of koukouloforoi broke away from the largely peaceful crowd of 100,000 and firebombed Marfin Egnatia bank, killing three young workers. Many Greeks call the dead martyrs of the financial crisis, and their hooded attackers murderers.

Panagiotis, now a burly 41-year-old, says he understands. He, like virtually all the anarchists, would not give his full name for fear of reprisals, but says he and other Exarcheia activists are appalled and saddened at the deaths.

“We are not against violence,” he said, over a shot of raki at a popular Exarcheia anarchist hangout. “But when we decide to use it, we will think a hundred times about how and why. These kids on May 5 didn’t even think for a minute. They only destroyed, only for the sake of destroying.”

In a country where taking to the streets is part of national culture, the koukouloforoi have long been tolerated as urban guerrillas splintered from anarchists, far-left activists and anti-globalization campaigners, who articulate deep frustrations about Greek cronyism and corruption.

On the eve of Greece’s fourth general strike and another planned demonstration against austerity measures, they have become a leading force in what many here fear is the beginning of a long, hot summer of social unrest that could hurt the country’s economic recovery.

But the koukouloforoi are by no means a unified force. In recent years, they have grown to include vigilantes and petty criminals who are not tied to any ideology, according to police and security experts. “They are not a disciplined group that’s easy to profile,” said Mary Bossis, a professor and security expert at the University of Piraeus. “Many are hooligans or robbers or just very angry young people who want to damage anything. These days, it’s hard to know how many are activists.”

Wearing black clothing, helmets and masks and carrying clubs, the koukouloforoi hijack some of the hundreds of peaceful demonstrations that take place in Greece annually.

Their favored targets are banks, government buildings and other symbols of wealth and power.

In Greece, anti-state protest has its roots in the civil war of 1946-49 and especially the military dictatorship of 1967-74, when tens of thousands of students helped overthrow the junta.

Most anti-authoritarians in Greece are not violent, though experts note that the movements tend to attract some disaffected teenagers and twentysomethings from comfortable Athenian suburbs. They rail against authority on Facebook groups like “I want to blow up Parliament (when everyone’s in there).” Like protest movements from Ukraine to China, they communicate and organize themselves using the Internet and cell phone text messages.

Many anarchists approached since the May 5 demonstrations declined to be interviewed, saying they felt unfairly targeted by the Greek police and mistreated by the news media. Only a few, like Panagiotis would go so far as to provide their first names.

In an interview last month, Kostas, a 21-year-old university student and anarchist who declined to give his full name because he feared police reprisal, said that he sympathized with koukouloforoi, even if he had never donned their garb.

Kostas said he lived with his parents in the upper middle-class suburb of Halandri. He was outraged that the Greek government applied for billions in loans from the International Monetary Fund and the European Union, which he likened to “two faceless, soulless bosses.”

Greek politicians “are the criminals, not the koukouloforoi,” he said, after an anti-I.M.F. protest on April 23 where he had broken shop windows in central Athens with pieces of broken marble.

A spokesperson for Public Order Minister, Michalis Chrysohoidis, said the minister, who in 2002 led the arrest of the long-elusive 17 November terrorist group, wanted to protect Greeks’ “sacred right” to protest peacefully. But because of what the ministry called a “zero tolerance” policy toward violence, the police have also stepped up patrols in Exarcheia — often unfairly, activists say.

On the evening of May 5, police officers raided the center of a prominent leftist and anti-authoritarian group called Diktio, or the Network of Political and Social Rights, injuring several people, said Yianna Kourtovik, a lawyer and longtime Diktio member. “They called us murderers,” she said.

In December 2008, Athens was shaken by weeks of rioting after a police officer shot and killed 15-year-old Alexandros Grigoropoulos after a standoff in Exarcheia. The teenager, who lived in a wealthy Athens neighborhood, is considered a victim of police brutality by many Exarcheia activists.

Though the activists have widely denounced the May 5 violence, they acknowledge that their call to revolution is often misunderstood by young people. Some anarchists say the movement has created a “monster.”

Vassilis Chajiakovou, the 44-year-old manager of the Ianos bookstore in central Athens, faced down one of the koukouloforoi who bombed Marfin Egnatia bank and his own bookstore on May 5. The bookstore was already in flames when a wiry young man in the hood and mask threatened Mr. Chajiakovou with a gasoline bomb.

Across the street at the bank, employees trapped inside were screaming for help. Soon, two women and a man in their 30s were dead from smoke inhalation.

That day’s protests had a particular resonance to Mr. Chajiakovou. A former anarchist and anti-authoritarian himself, he recalled how, at 19, he had thrown rocks at the French nationalist politician Jean-Marie Le Pen, who was visiting Athens in 1985, while his friends lobbed Molotov cocktails.

Years later, his bookstore, which suffered €100,000, or $126,000, in damages during the recent attack, became a popular hangout for counterculture intellectuals. Yet now he fears that a legitimate protest movement that once was motivated by social justice has become consumed by hate.

“I don’t want to believe the people who threw bombs at us and murdered three people across the street belong to any legitimate ideology,” he said. “The people who stormed into our store wanted to kill for the thrill of it. There’s nothing revolutionary about that.”