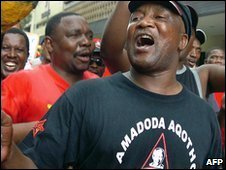 Thousands have joined a strike by South African transport workers, crippling rail and port services across the country.

Unions want a 15% pay rise for staff at Transnet, the country’s state-owned main transporter of freight.

South Africa is preparing to host the World Cup, which starts on 11 June.

Unions have rejected Transnet’s offer of an 11% pay rise.

Transnet transports thousands of tonnes of freight daily by train, as well as loading and unloading goods at South African ports.

Deliveries of fuels such as coal have been minimal, reports South Africa’s Business Day newspaper.

The country’s passenger rail services, which rely on Transnet workers, have also been affected.

The Passenger Rail Agency of South Africa (Prasa) has suspended all services operated by Shosholoza Meyl, the country’s long-distance passenger rail company, for the duration of the strike, says Business Day.

Up to 30,000 passengers would be affected “based on the assumption that the strike continues for a full two weeks”, Prasa acting CEO Tumisang Kgaboesele was quoted as saying by the newspaper.

This entry was posted in resistance and tagged south africa, strike, worker resistance. Bookmark the permalink.