Last week’s deadly protests in Kyrgyzstan have left the country in political limbo. But as the interim government tries to restore order, questions are also being asked about the impact on the economy, reports the BBC’s Rayhan Demytrie from the capital, Bishkek.

Shapina Teleushova’s voice trembles in fear as she recalls the night of the protests.

“It was quiet and then suddenly I heard a crowd yelling in the street,” the bed and breakfast hotel employee said.

“Suddenly about 200 people stormed the building, they were equipped with sticks and rocks. It was chaos.

“They destroyed everything, the doors, the windows, smashed all the TV sets and other equipment. Our guests were so scared.”

It was a night of looting and shooting in Bishkek, following the mass protests across the country on 7 April.

The next day, thousands of residents in Bishkek woke up to chaos. Smoke was still coming out of dozens of shops that were looted and set on fire.
“We had mobile phone sets worth 4m som ($90,000, £58,000); nothing is left now,” one shopkeeper at Vefa trade centre cried as she swept shattered glass and mobile phone packaging into a pile. 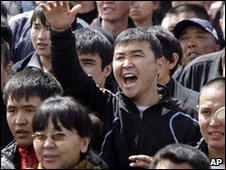 Along with shopping centres, more than 20 grocery shops belonging to the Narodniy chain were almost swept away. The shelves were emptied, the equipment broken, doors and windows destroyed.

Several thousand looters had ruled the streets of Bishkek. There were no police to stop them.

The president had fled the capital, the prime minister resigned.

The opposition leaders were in the process of setting up an interim government.

The unrest lasted for at least two nights. Shooting could be heard in different parts of the town. Many business owners spent the night guarding their belongings.

Nearly one week on, many shops and small businesses are still trying to assess the damage.

“Our chain of supermarkets distributes products from over 200 companies, so all of those companies were directly affected by this widespread looting,” said Anatoliy, in charge of the marketing department at Narodniy.
A mass funeral is held on the outskirts of Bishkek on 10 April 2010
After the uprising, Kyrgyzstan’s severe poverty remains unchanged

The deputy head of the interim government in charge of finance, Temir Sariyev, said that in the coming days a special commission would be set up to assess the damage to the economy.

Talking to Russian newspaper Kommersant, he promised that the new government would help local businessmen, but he did not specify how.

“What should the business community do? Where do we go next? To whom do we complain?” asked Uluk Kydyrbayev, who heads Bishkek Business Club, an association that comprises more than 20 companies.

In 2005, when Kyrgyzstan went through the so-called Tulip Revolution, the mass protests that brought President Kurmanbek Bakiyev to power, the country saw the same post-revolution chaos.

“Back then it took the government three years to reimburse damage to businessmen,” Uluk Kadyrbayev said.

“This time we want to help the new government to restore the economy. But for that we need stability, security and legitimacy.”

Observers say those things cannot be promised by the interim government, which is faced with the potential escalation of conflict in the country.

For several days President Bakiyev refused to resign, saying there would be bloodshed if the interim government attempted to arrest him.

He has now said that he will resign if his safety is guaranteed but no agreement is yet in place.

Meanwhile the lack of rule of law is creating further problems, with illegal land seizure becoming an issue.

On the outskirts of Bishkek, a group of young men are marking what they call “the people’s land” with colourful ribbons. Suyunbek, 23, from the northern city of Naryn, sells onion in a local market.
Protesters in Bishkek on 8 April 2010
Kyrgyzstan’s population is young – but there is not enough work

He says the land will help him to feed his family.

“The government kept promising since 2005 that they would give land to people. Even though I am young, my parents are old and I want to look after them. I want to build a little house here,” he said.

Nearby a police patrol is calmly watching the young people dividing up the land they do not own.

“We are here to make sure people are not running on the road. That’s all we’ve been ordered to do,” one policeman said.

Kyrgyzstan’s uprising was a result of the worsening economic situation in a country of five million, where the majority of working-age males seek employment elsewhere.

They travel as migrant workers to Russia or Kazakhstan. But the remittances they had been sending back home dried up after the global financial meltdown.

Small protests erupted in February and March in mountainous regions, where people were demanding price cuts. In a country where the average monthly income is $70 many simply could not afford to pay over $100 for utility bills.

“If you look at some of the root causes of what happened, it is that the population has got poorer and poorer over the last two years with price increases and the drop in remittances,” said Catherine Brown, Mercy Corps country director in Kyrgyzstan.

“Some of the destruction, the looting, happened because people saw an opportunity to get things there is no way in their life they can afford.

“The root cause of this is the poverty level of people.”

This entry was posted in resistance and tagged fuck the economy, insurrection, krygyzstan, riot, social tension. Bookmark the permalink.