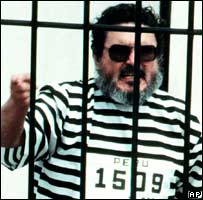 LIMA – Shining Path founder Abimael Guzman, who is serving a life sentence for terrorism, is on a hunger strike to pressure the Peruvian government to allow him to wed girlfriend Elena Yparraguirre, who is also imprisoned, and protest prison conditions, the guerrilla leaders’ attorney said.

Guzman was examined by a doctor on Tuesday and was visited by a prosecutor who officially took his complaint, attorney Alfredo Crespo told Efe.

The guerrilla leader gave a letter to the prison warden explaining the reasons for the hunger strike, while Yparraguirre did the same at the Chorrillos women’s prison, where she is also on a hunger strike, Crespo said.

“They have not received or ingested any foods, just liquids. They were forced to take this extreme action because of the refusal by the state’s authorities to provide facilities for them to get married,” the attorney said.

Crespo said he also met with the National Penitentiary Institute director, who provided a copy of the “imprisonment document,” but Guzman refused to accept the document because it was not the original.

The document in question is a certificate stating that Guzman is imprisoned, opening the way for the inmate to obtain an identity card.

Obtaining the document would allow Guzman to meet with a doctor, a notary and a Civil Registry official, all the steps needed to get married, Crespo said.

The original certificate alone will not be enough, the attorney said.

Guzman and Yparraguirre, who is serving a life sentence, are also demanding that they be allowed to meet with relatives, journalists and researchers, an end to “harassment” of their attorneys and permission to receive books “without censorship,” Crespo said.

The attorney said he did not know whether his clients were willing to take the hunger strike “to its final consequences.”

Crespo said last week that he interpreted the government’s refusal to grant the 75-year-old Guzman permission to marry as a move to prevent him from having heirs who could eventually turn his grave into a monument or cult site.

Guzman and Yparraguirre, who were separated in 2006, requested permission to marry last October but have faced numerous obstacles, the attorney said.

The two former guerrillas have renounced the armed struggle and said several times that “the people’s war ended in Peru.”

Guzman, moreover, has called the remaining members of the Shining Path “mercenaries.”

The so-called “remnants” of the Shining Path did not comply with Guzman’s order more than a decade ago to end the armed struggle.

Guzman, for his part, does not recognize the remaining fighters as Shining Path members.

Imprisoned Shining Path members have been calling for a general amnesty for themselves and soldiers convicted of human rights violations, as well as for jailed former President Alberto Fujimori.

The former guerrillas have weighed the possibility of forming an alliance with some extreme left parties and running in Peru’s next general elections.

The Maoist-inspired group launched its uprising on May 17, 1980, with an attack on Chuschi, a small town in Ayacucho province.

A truth commission appointed by former President Alejandro Toledo blamed the Shining Path for most of the nearly 70,000 deaths the panel ascribed to politically motivated violence during the two decades following the group’s 1980 uprising.

The guerrilla group also caused an estimated $25 billion in economic losses, according to commission estimates.

Guzman, known to his fanatic followers as “President Gonzalo,” was captured with his top lieutenants on Sept. 12, 1992, an event that marked the “defeat” of the insurgency.

Guzman, who was a professor of philosophy at San Cristobal University before initiating his armed struggle in the Andean city of Ayacucho, once predicted that 1 million Peruvians would probably have to die in the ushering-in of the new state envisioned by Shining Path.

The group became notorious for some of its innovations, such as blowing apart with dynamite the bodies of community service workers its members killed, or hanging stray canines from lampposts as warnings to “capitalist dogs.” EFE