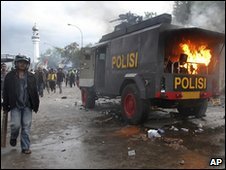 Jakarta – At least three people dead and 150 wounded.  That is the toll from clashes yesterday in North Jakarta. Thousands of residents turned to urban warfare against 2 thousand public officials, backed by the police. The violence was unleashed by a dispute over land in sub-Koja district, near the port of Tanjung Priok. Rumors that officials demolished the tomb of a famous 18th century Islamic preacher also contributed to exacerbate the Muslims.

Overnight Indonesian President Susilo Bambang Yudhoyono called a press conference at the palace, calling on citizens to remain calm. “I am very sorry – said the head of state – for the violence that occurred in North Jakarta”. The President has ordered the governor of the capital, Fauzi Bowo to initiate detailed investigations on the matter. Meanwhile, one thousand police officers are guarding the city hall in central Jakarta, in an area not far from the offices of Vice-President of Indonesia and the U.S. embassy.

The origin of the clashes is a dispute over a plot of land – 20 square meters wide – near the busiest port in the country: the Tanjung Priok Export-Import, north of the capital. The area is in the sights of PT Pelindo, a company which runs the airport that aims to take over the property to build a road and rail link to the port. Injunctions by public officials to demolish illegal houses were met by a residents protest complete with machetes, sticks, swords and small arms.

Meanwhile, the ethnic Chinese community – the victim of a harsh attack in 1998, costing thousands of lives and destroying millions of business – is on alert for fear of further violence. The commercial heart of the capital is in fact only three kilometers from the area where the clashes occurred. Yesterday, demonstrators blocked vehicles and forced drivers to show identity cards, looking for plainclothes police officers or public officials.

The local Muslims ire has been further exacerbated by a rumour that officials – known by the nickname Satpol PP – demolished the tomb of Habib Hasan bin Muhammad Al Hadad, a famous 18th century Muslim preacher, the protagonist of the spread of Islam in Java.

Jakarta Governor Fauzi Bowo immediately intervened in an attempt to calm the waters, stressing that the administration has no intention of infringing on the place of worship sacred to all Muslims of North Jakarta. President Yudhoyono finally ordered the immediate cancellation of the plan to demolish of homes in the disputed zone.

“We have to look first; what caused [the clash]; who was responsible,” Sr. Comr. Boy Rafli Amar, the spokesman, said as quoted by tempointeraktif.com.

Earlier on Saturday, Hotman Sinambela, a top official at the Public Order Agency accused that the police had left his subordinates as clash broke out, leaving public order officers to their own devices.

The clash was triggered by a land dispute between state-owned port operator PT Pelindo II and the self-proclaimed heirs of revered Muslim figure, Arif Billah Hasan bin Muhammad Al Hadad, whose tomb used to be located at the memorial complex on the land.