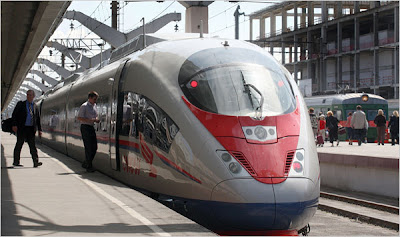 The high-speed Sapsan train was halted for several hours on Sunday after its power was cut and windshield was broken, in what Russian Railways is calling an act of sabotage.

The Sapsan train, which travels from Moscow to St. Petersburg at 200 kilometers to 250 kilometers per hour, has provoked the outrage of those who live near the railway, many of whom have vented their anger by pelting the passing train with rocks and ice.

A foreign object was hung from the overhead cable that delivers electricity to the train. When a rod connecting the train with the cable ran up against the object, the cable broke loose at high speed and shattered the windshield in the process.

“An act of vandalism is suspected behind the incident. The police are investigating,” a spokeswoman for Russian Railways said, asking not to be identified in line with company policy.

Transportation police confirmed that there was an incident near the village of Leontyevo, in the Tver region, that caused electricity to be cut to the train at 9:32 p.m. Sunday, but said no criminal activity had yet been confirmed.

“An investigation team of eight officers visited the scene and found no signs of criminal activity,” a spokeswoman for the transportation police said, asking not to be identified. She added that the power cable that was torn during the incident was taken for inspection.

Leontyevo has become the epicenter of a popular revolt against the Sapsan. In January, villagers were caught throwing ice and rocks at the train. One of the vandals said he had become outraged after a blast of air caused by the train knocked him off his feet.

Many others, however, are upset that the introduction of the train caused a number of local commuter trains to be canceled, creating huge inconveniences for people of the region.

The vandalism comes after two major terrorist bombings of the Nevsky Express train, which travels along the Moscow-St. Petersburg route: one in August 2007, in which 30 people were injured, and another in November 2009, in which 28 people were killed and 90 were injured.

The incidents have raised concerns that authorities and the railway are not doing enough to provide security.

Russian Railways provides tight surveillance along the 650-kilometer route, but it is hard to track every individual along its length, the company’s spokeswoman said.

Both terrorist attacks and acts of vandalism can be prevented, if proper engineering solutions are introduced, said Mikhail Blinkin, director of research programs at the Scientific Research Institute of Transport and Road Engineering.

In most places throughout the world, high-speed highways and railways are built outside residential areas and are fenced to avoid all kinds of accidents, Blinkin said.

“In this country, they launched a high-speed train to run on a conventional track — the Oktyabrskaya railway. The project came under fire from experts at the time, but no one would even listen.”