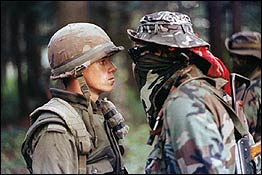 With discontent among Chile’s indigenous population simmering for centuries, Chile is looking to Canada for a solution.

A range of experts met at the Santiago’s Universidad Catolica this week to discuss indigenous human rights issues and to compare the Canadian and Chilean experiences.

“Canada backs [indigenous people] on important issues, such as the land and natural resources,” he said.  “A company cannot come to indigenous territories and exploit them or to put their projects there, as it happens in Chile. Over there [indigenous] people are respected, here they are not.”

Canada has policies aimed at correcting the many mistakes it made in treatment of its indigenous people in past. To compensate the native population, the state has given them special economic privileges, including tax exemptions, scholarships and some healthcare benefits .

“The goal is to achieve equality, not to treat everybody equally,” the dean of the Law faculty at Ottawa University Sebastien Grammond said.

Two issues play a crucial role in the indigenous rights discussion in both countries: land and natural resources exploitation.

“The Inter-American Court of Human Rights has ruled that the communal relationship that an indigenous community has with the land is a part of its culture. This means that a state has the obligation to give them territory,” Santiago Canton, Executive Secretary of the Inter-American Commission on Human Rights, told the Santiago Times.

There have been many conflicts over land between the state and the Mapuche community in the recent years, especially in the La Araucania region (ST, Nov. 30), where Chile’s indigenous Mapuche population is most numerous.

Chile’s 1993 Indigenous law established the National Corporation of Indigenous Development (CONADI), a state agency that, since its inception, has handed out large amounts of money for purchasing (usually disputed) properties from farmers and forestry companies (ST, March 24) and returning them to indigenous communities.

But James Anaya, the UN special rapporteur for indigenous rights, wrote in a September 2009 report that it is “worrying that it seems like there is no internal mechanism in Chile to recognize clearly, to restitute and to protect the indigenous land and resources rights, unless these had been previously registered.”

“Respect for our territory and consultation are the keys,” Correa said the Santiago Times. “When we are involved in consultation, we can decide what the best is for us.”

“The convention obliges the state to consult, but doesn’t oblige it to accept the result of the consultation… We are fighting now to get a binding character for the consultation,“ Correa said.

Consultation results in Canada, however, are not binding.

“The consultation is binding only if it concerns a project inside a reservation,” Canadian lawyer Elisabeth Patterson explained. “Otherwise, the indigenous community must negotiate a solution.”

Activists here say they resent the absence of recognition of the indigenous people in the Chile´s constitution and the lack of indigenous representation in the National Congress.

“There is just no political will to advance on this,” Correa said. “We didn’t see an effort during 20 years of center-left Concentration rule, and we don’t believe we will see it under the new rightist government, either.  So we are looking for a comparison with international experiences to be able to support what we want, to safeguard the indigenous culture in Chile.”

“There are some positive developments in recognizing the rights of indigenous people in Latin America,” Canton said. “But there is long way to go to convert these legal principles into practice.”