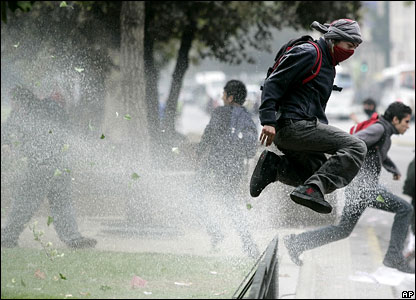 SANTIAGO – Ninety-seven people were arrested amid disturbances during the commemoration of “The Day of the Young Combatant,” but no one was injured, Chilean authorities said Tuesday.

All but one of the arrests were in Greater Santiago, Deputy Interior Secretary Rodrigo Ubilla said.

He said that in the earthquake-stricken southern region of Bio Bio, 133 people were arrested for violating the curfew, though he said that those arrests were unrelated to acts of violence.

He stressed the “successful planning” carried out by the Carabineros, Chile’s militarized national police, which deployed more than 2,000 troops into the streets of Santiago and another 2,000 around the rest of the country.

“The Carabineros’ planning included establishing an early presence at the different points where conflicts have traditionally occurred,” Ubilla told Radio Cooperativa. “When there were episodes of violence, basically barricades, Carabineros identified the leaders of the group and tried to focus attention on them.”

The incidents diminished when the barricades were removed, and, in one district of the capital, fire from automatic weapons was heard.

Unlike other years, almost all those arrested were adults, evidence that it has been possible to reduce the participation of minors in the episodes of violence.

The Day of the Young Combatant marks the deaths of brothers Rafael and Eduardo Vergara Toledo, Revolutionary Left Movement, or MIR, members killed by the security forces on March 29, 1985, in the Santiago slum of Villa Francia during a protest against Gen. Augusto Pinochet’s military dictatorship.

On this day last year there were 79 arrests and 19 people injured, 11 of them police, while in 2008 one person was killed, nine were wounded and 122 were placed under arrest.

During the disturbances there were momentary electricity blackouts that affected some 20,000 households in the capital-area municipalities of Cerro Navia, Lo Prado, Pudahuel and Quilicura. EFE