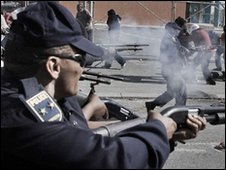 Police in South Africa should have clear rules on using deadly force, an activist has said, amid a debate on the number of civilians killed by police.

The government is considering amending the law, with some calls for police to have a “shoot-to-kill” policy.

The most recent figures show that the number of people killed by the police increased by more than 25% over the previous year.

“What we have been arguing for consistently is that there needs to be good training around the use of force, the legislation needs to be clear and we need to have consistent messages,” African Policing Civilian Oversight Forum spokesman Sean Craigh told Talk 702 radio.

In 2008 South Africa’s then Deputy Minister for Safety and Security Susan Shabangu said police should shoot to kill criminals, following the death of many police officers in the line of duty.

South Africa has one of the highest rates of violent crime in the world and the country’s police chief Bheki Cele has also defended the use of “deadly force” by police when necessary.

Opposition parties and other rights groups say lethal force has caused an increase in the loss of innocent lives.

In November 2009 there was outrage over the shooting of a three-year-old boy by a police officer who allegedly mistook a pipe the boy was carrying for a gun.

And in the same month two off-duty police officers allegedly shot and killed a street vendor while “under the influence of alcohol”.

But the Independent Complaints Directorate said there was no link between the killing of civilians and politicians’ statements.

It said the rise was rather due to an increase in violent crime.

It said many of the shootings were in self-defence or accidental – where for example people were killed in crossfire – and some even involved police using guns in domestic violence incidents.

Police in South Africa operate in dangerous conditions and are sometimes outnumbered by heavily armed gangs.

Deputy Police Minister Fikile Mbalula said last year that officers should “shoot the bastards”, claiming that he was referring to “hard-nut-to-crack, incorrigible criminals”.

President Jacob Zuma later clarified that the law does not give the police “a licence to kill”.

The Criminal Procedure Act – known colloquially as “the Shooting Act” – deals with the use of force by police and the amendment currently being debated by politicians would give the security forces more powers to tackle crime.