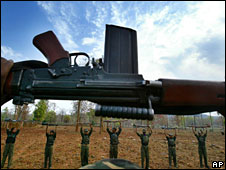 At least three policemen have been killed in a clash with Maoist rebels in the eastern Indian state of Orissa, police have said.

The fighting took place in the Ambajhiri forests in Gajapati district early on Wednesday morning.

Clashes began when the rebels, hiding inside the forest, fired at police. Four policemen were injured.

The rebels are fighting in rural areas to establish communist rule in a large swathe of India.

The Maoists say they are fighting for the rights of the rural poor who they say have been neglected by governments for decades.

The government recently began a major offensive against the rebels.

The Maoists have called a two-day strike to protest against the offensive and on Tuesday, the rebels killed two people and blew up sections of railway track in four eastern states.

The destruction of one section of track in Bihar caused an express train to derail, but no casualties were reported.

“A team of about 35 police personnel had gone into the Ambajhiri forests on a combing operation,” Sanjeev Marik, head of the anti-Maoists operation in Orissa state told the BBC.

“The Maoists, who were hiding inside the forests, fired upon the search team which retaliated immediately. The Maoists later retreated deep inside the forests. The injured have been shifted to Vishakhapatnam in neighbouring Andhra Pradesh,” he said.

“Reinforcements have been sent to the area and combing operations intensified,” he added.

Indian Prime Minister Manmohan Singh has described the Maoists as the single biggest threat to India’s internal security, and ordered a major offensive in November.

Nearly 50,000 federal paramilitary troops and an equal number of policemen, equipped with helicopters and unmanned aerial surveillance vehicles, are taking part in the operation.