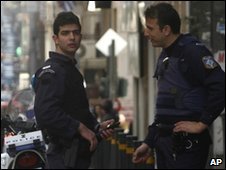 A bomb has exploded outside the home of a Pakistani community leader in the Greek capital Athens – the second blast in the area in less than 24 hours.

Police said there were no injuries, but some damage was done to the entrance of the apartment building and three cars.

On Friday, a bomb damaged the office of a far-right anti-immigration group.

No group has said it carried out the attacks, but there have been numerous bombings attributed to far-left or anarchist groups in recent years.

Greece has faced severe anti-government protests and rioting since police shot dead a teenager in December 2008.

In the latest attack, police were able to seal off the area after anonymous warning calls were made to a Greek TV station and a newspaper 15 minutes before the explosion.