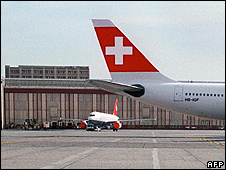 Police methods at Zurich airport are now under scrutiny

Switzerland has halted special flights to deport asylum seekers after a Nigerian man on hunger strike died on the tarmac at Zurich airport.

Swiss police say they had shackled the 29-year-old man, who was being forcibly deported along with 15 other Nigerians whose asylum bids had been rejected.

When he fell ill on Wednesday the police took off his shackles and a doctor tried in vain to revive him.

Swiss authorities have launched an investigation into the incident.

Police said they had shackled the man because he had resisted deportation.

“They treated us like animals,” said one, called Emmanuel.

“They shackled our feet, knees, hands, hips, arms and torso and made us wear a helmet like those worn by boxers. It was simply impossible to move,” he said.

The man who died was a drug-dealer who had been on hunger strike for several days.

It is the third such death in Switzerland since 1999.

Last year there were 43 special repatriation flights from Switzerland, deporting some 360 people, mostly to the Balkans or Africa, Swissinfo reports.