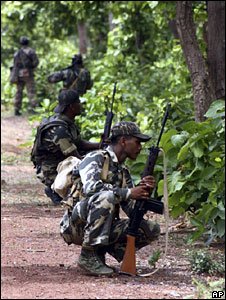 Thousands of forces have joined those already operating in jungle areas of three eastern states where the rebels have a formidable presence.

A major security offensive – Operation Green Hunt – to flush out the rebels is under way in several states.

More than 6,000 people have died during the rebels’ 20-year fight for communist rule in many Indian states.

The rebels have a presence in about a third of India’s 600-odd districts.

The newly-arrived federal forces are now moving into the jungles of West Bengal, Orissa and Jharkhand states that may house a number of rebel hideouts.

“We have seized a lot of explosives and destroyed a few rebel camps,” he said.

With the chance of peaceful negotiations with the government fading, the Maoist military wing chief Koteswara Rao has threatened to attack targets in cities across Bengal and Orissa.

But Mr Rao said his offer of a 72-day ceasefire with government forces still stands. He has also named three “intellectuals” to mediate between the government and the rebels.

The government has not reacted to the latest demand of the rebels, and called some of their demands “bizarre”.