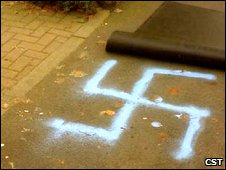 Anti-Semitic attacks in the UK doubled in the first half of this year compared with the same period in 2008, according to new figures.

The Jewish Community Security Trust, which monitors anti-Semitism, says it recorded 609 incidents between January and June – up from 276 last year.

Most incidents were abusive behaviour, but there were also 77 violent acts.

The trust said the rise had been driven by anger over Israel’s military campaign against Hamas in Gaza.

That conflict, between December 2008 and January 2009, was followed by an almost immediate rise in anti-Semitic incidents in the UK.

Some 286 incidents occurred in January alone – but the security body said that a disproportionately higher monthly number of attacks and abuse continued into the spring.

The attacks recorded so far include 77 acts of physical violence and two life-threatening assaults, one of which was an attempt to run somebody over with a car.

The CST says there have also been 400 incidents of general abuse, including hate mail to synagogues, along with 62 attacks on property that can be clearly defined as having a religious role.

The CST uses definitions of violence which are broadly in line with the way police record incidents elsewhere in society. It stresses that it has also discounted more than 200 reports where it could not work out if the incident was anti-Semitic or anti-Israel.

Mark Gardner, of the CST, said: “British Jews are facing ever higher levels of racist attack and intimidation that threaten the wellbeing of our otherwise happy and successful Jewish community.

“There is no excuse for anti-Semitism, racism and bias, and it is totally unacceptable that overseas conflicts should be impacting here in this way.”

Earlier this year, Muslim leaders issued a joint statement denouncing anti-Semitism, amid fears that violent elements from within their own communities were responsible for the increase in attacks.

Cohesion minister Shahid Malik, one of two Muslims in government, said: “This rise in anti-Semitism is not just concerning for the British Jewish communities but for all those who see themselves as decent human beings.

“The fight against anti-Semitism is a fight that should engage us all. This country will not tolerate those who seek to direct hatred towards any part of our community.

“It may be legitimate for individuals to criticise or be angry at the actions of the Israel government but we must never allow this anger to be used to justify anti-Semitism.”