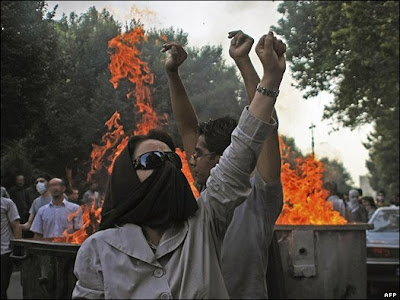 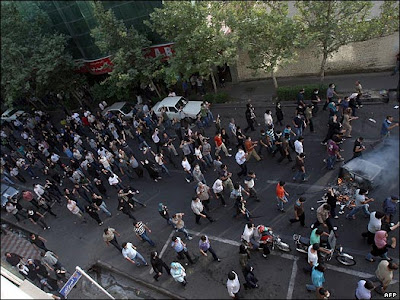 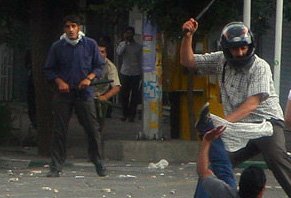 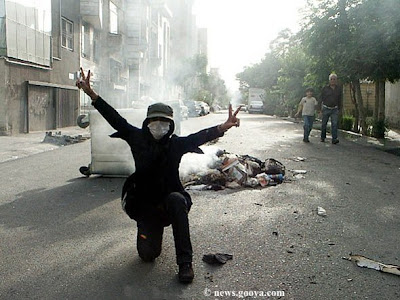 How resistant is ” July 9th “.Everyone has came.Young and old and middle-aged.Not only in one street but this time they have learned from the past three weeks and they hold mass protests in 7-8 main areas.There is no silence.everyone’s chanting.Some people chanting ” God is great ” but soon after it becomes to ” death to Dictator ” and ” Coup government ,resign resign “.The main conflict era is Valiasr-Enqelab intersection at Daneshju(Student) park.

Crowd is concentrated and intensive and anti-riot guards attack people with tear gas and batons.Faces are bloody.People are going to streets and coming back to pedestrian way all the time.Cars are beeping like two weeks ago.Continuous beeps.Once again fists and V signs for victory and unity can be seen in the sky. Groups of people from main streets going to wards Enqelab Sq and Tehran Uni.This time they have a long slogan like 79 Rev time and almost they sing it:

” Traitor Mahmoud(Ahmadinejad) wish you be a displaced homeless/you ruined our homeland/you killed our young people …/Death to you!/Death to you!…Death to you!”
Tear gases are coming from every where but people have got used to it.No one feels like vomiting , they just set up a fire immediately. Some send the cigarette smoke to person’s eye who is standing next to them.We are at Keshavar Blvd-Kargar St intersection.Special forces attack us from down street and we run chanting to the other direction.Some people join us from Fatemi Street side and we go back down street and chant ” Don’t be afraid! Don’t be afraid! We all are together!”

There is no shooting in this area and we have not heard anything like this from no where.At the first row,it’s full of daughters and mothers.Angry and fresh and inspiring! This time plainclothes also have joined them and they attack us but they are less than past days in number and obviously it’s because of people’s decipherer about their crimes in the past three weeks and some of plain-cloths have been worn by revolutionary guards uniform to look more disciplined.

Now they are attacking people with motorcycles and are big in number.Hundreds of people go to mini-bazaar next to Laleh park and there’s no way to get out again but we jump over the fences and barbs and go inside park,our destination is Amirabad street.They are trying to close the road and prevent people from Amirabad st to join Leleh park people.

Amirabad is crowded. At the corner of the valley which Neda was dead, people are standing and chanting ” Death to dictator “.An old man who is saying he is 80 , happily continues ” no one is afraid anymore.Everyone has came.They(regime) have to go. Look , it’s too crowded but there’s not even one mullah!People make them pay for Neda’s blood! ” He’s right.

People have understood the situation very well.They know about regime’s weaknesses.No one is afraid anymore. Young and old are chanting.stronger than 3 weeks ago.There’s a car beeping with a family inside and going slowly toward North Amirabad.The family’s son shouts : Are you going to fight peacefully after all?!! Can’t you see they are armed !! His sister accompanies him by chanting ” Death to dictator ” . My only reaction is to lift my fist and repeat the slogan with them.

I come and find a place to write this report and post it on-line.Tonight is going to be an inflame night.Slogans on rooftops would be louder than any other night.There’s too much injured and detained people again. It’s not dark yet,Inspection Stops are at every corner and with uniformed plain-clothes.They think they can horrify people.How stupid they could be??!! These are thousands of people who told regime with their strong presence that “your time is up!” There’s no news from other cities yet but there’s no doubt that this year’s July 9th would have a big influence on future changes.No doubt!!

Meanwhile, here’s what U.S. Leftists have been saying about the class-conflict in Iran

What is astonishing about the West’s universal condemnation of the electoral outcome as fraudulent is that not a single shred of evidence in either written or observational form has been presented either before or a week after the vote count.

The great majority of voters for the incumbent probably felt that national security interests, the integrity of the country, and the social welfare system, with all of its faults and excesses, could be better defended and improved with Ahmadinejad than with upper-class technocrats supported by Western-oriented privileged youth who prize individual lifestyles over community values and solidarity.[Emp. added]